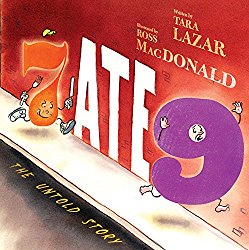 Brief summary: Detective  I is waiting for his next case when 6 comes into his office nervously explaining he is worried about 9 going after him.  I takes the case and goes around town asking letters and numbers about 9. The case is solved by Detective I with all becoming friends at the conclusion.

Comments: Based on the old riddle: Why is 6 afraid of 7? Because 7, 8, 9(seven ate nine). Hilarious puns about numbers and letters. A great book to read to all ages especially though to intermediate students who will get all the jokes and homonyms. Told in the first person narrative mode like an old detective movie. This is one of my new favorites.

This may be confused with an earlier book with a similar title: Seven Ate Nine (2012) by Stan Resnicoff.

***Corrected from earlier post. The author is actually Tara Lazar and not Ross MacDonald.