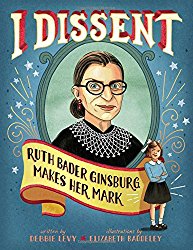 Brief summary: Ruth Bader, daughter of a Russian Jewish immigrant, grew up in New York in the 1940s when men usually went to universities and got jobs while women married and were housewives. Her mother, Celia Amster Bader, wanted more for her daughter. She took her to the library to read all about successful females which helped her daughter soon realize that girls could have careers as well. As Ruth went through high school, she learned she was good at some subjects and not so good at others. She continued to high school becoming an outstanding student and had extra talents like being a baton twirler and cello player. The day before her graduation, her mother died. She decided to honor her mother’s wish and attend college in the 1950s which at that time was not a popular thing for girls to do. She met her husband, Marty Ginsburg, in college. They both went to law school, got married, and had a baby girl called Jane. Ruth experienced being in a field where there were few women and prejudices against Jewish people.  She had another child named James while she worked as a law professor.  She still managed to work and have two children which was not a very common thing women did at that time. In the 1970s,  she fought cases for women to be in the workplace but also that men had a right to stay home and take care of  children. She did such a good job as a lawyer that she was asked by President Bill Clinton to be a justice on the Supreme Court. When Judge Ginsburg votes  with the winning side, she wears a special lace collar over her robe and another one when she dissents. At age 84, Judge Ginsburg still is one of the justices of the Supreme Court.

Comments: The narrative nonfiction book outlines the highlights of Judge Ruth Ginsburg’s life including a “More About Ruth Bader Ginsburg”, “Notes on Supreme Court Cases”, and “Selected Bibliography” sections in the back. This book could be used in elementary school as well as middle.