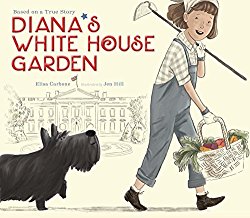 Brief summary: Diana Hopkins lived in the White House with her father, Harry Hopkins, who was the chief advisor to President Roosevelt. This ten-year old girl wanted to do her part for her country during the second war and was trying to figure out a way to do so. Diana did get in a lot of mischief while living in the White House often accompanied with the Roosevelts’ black Scottish terrier, Fala. Diana heard the President tell her father that he wanted the food our farmers grew to go straight to the soldiers to make sure they were fit and for civilians to start growing gardens for their own food in their yards and empty lots.  Diana volunteered to help. The President wanted to be an example for others to follow, so Mrs. Roosevelt, Diana, and George (the groundskeeper) planted a garden in the lawn of the White House with all three tending to it. Diana felt good being able to sit at the table with her father and the Roosevelts knowing they were eating food from the garden.

Comments: This is based on a true story. Diana Hopkins’ photo is in the back holding hands with Mrs. Roosevelt. There is an author’s note and illustrator’s note explaining why Victory Gardens were needed. I did not realize that there was not enough steel and tin for fighter planes and to be used for canned vegetables. Classes were being offered to teach canning with glass jars so that people had food during the winter. The gardens were growing everywhere: city parks, apartment rooftops, urban yards, and suburban yards.

This book could be used for  science units of study and also for teaching how if we all work together, we can make a difference as a whole.