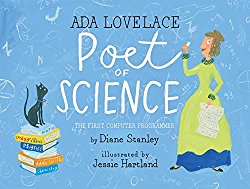 Brief summary: Ada Lovelace, daughter of Lord Byron and math whiz Annabella, did not like the things and interests of other young women of her time. She co-worked with Charles Babbage to invent the Analytical Engine which could run any mathematical calculation by using punched cards and considered the first programmable all-purpose digital computer. Ada wrote the mathematical code. Ada wrote a scientific paper about the invention giving it scientific and mathematical attention. She translated the work from French to English.

Comments: Back pages explain  how  both scientists worked on the engine, but there was some concern of what each contributed.  Good addition for a coding study.

(I may get a commission for purchases made through links in this post through the Amazon Affiliate Program.  Books reviewed were checked out of the public library and not sent to me free for review).